OnePlus is a smartphone manufacturer that exclusively sells its bargain high-end One Plus One. This phone is only available for purchase with an invitation, but that has not stopped 500,000 consumers from purchasing it over the past 8 months. OnePlus has grown a solid base of promoters by providing a quality phone at a good price (they only make $10 profit per handset) and despite a limited inventory and weak supply chain, “Android fans have been clamoring for the limited invites” to purchase the OnePlus One.[1] This Cinderella story juxtaposes curtly with Amazon’s failed launch of the Fire Phone. The differences in success can be attributed to the vast dissimilarity in consumer experience. While both handsets were the sole smartphone launched by each manufacturer, the sparse OnePlus early adopters were delighted by a surprisingly cheap, capable handset, while Amazon Fire Phone adopters paid a whole lot for a Pandora’s Box of problems. Consumer reaction to these respective launch journeys is captured in the graph below. Delight around the OnePlus One slowly increased even though buzz volume remained fairly low, while consumers became less delighted by the Fire Phone as more and more people talked about it. 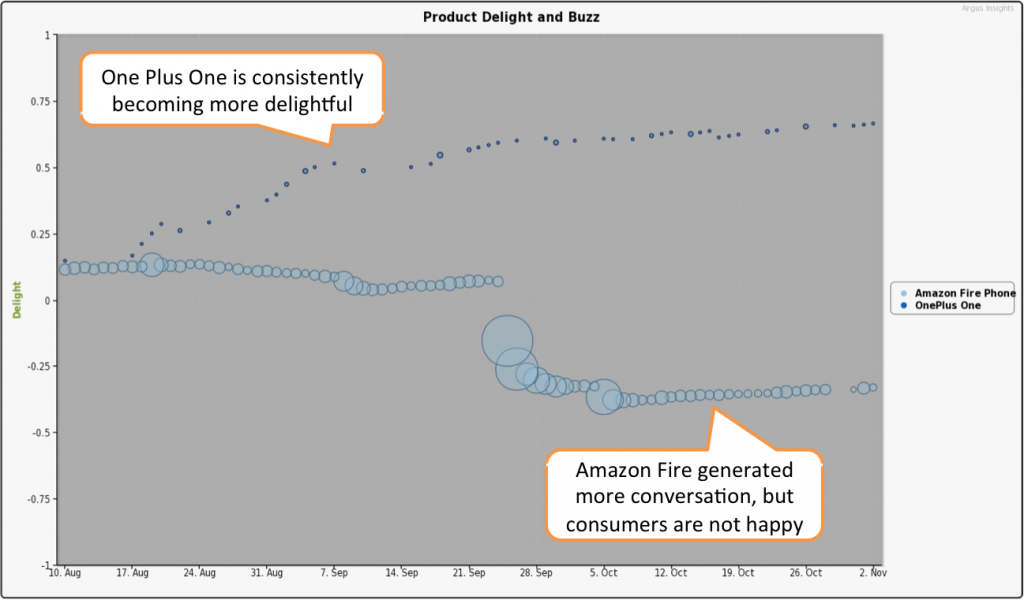 So how did the previously unknown OnePlus beat the most popular retailer on the block in smartphone sales? They are building their “brand around bargain hardware and online buzz,” driven by a quality product that pleases their customers. [2] Brand awareness can attract consumers, as it did initially for Amazon, but if they are not delighted, early adopters are destined to become the only adopters. OnePlus is taking advantage of happy customers to develop as a company despite limited supply and lack of initial profit. They plan to sell 1 million OnePlus One phones by the end of 2014,[3] and Argus Insights will continue to track their progress.

To learn more about where OnePlus and Amazon fall in the smartphone market according to consumers (spoiler alert: OnePlus was the most delightful brand of September), take a look at our Monthly Smartphone Reports. If you want just a WinkTM of insights to keep you informed between blogs and reports, sign up for our Free Weekly Newsletter.

Webinar Monday 11/17: Black Friday Bargains Do Not Always Equal Brilliant Buys Separating the Buzz From the Delight: Which Products Should Consumers Really Want this Holiday Season?