Today Apple announces the next iPhone, wait, iPhones.  Off their traditional one year release cycle but bouyed by the rapid adoption/defection to Verizon by iPhone 4 customers, Apple is expanding their game in the US Market.  Question is, will Sprint achieve the gains expected by iPhone exclusivity over the coming months.  Our feeling at Argus Insights is yes!

Why?  Because carriers matter.  Below you’ll a chart of the overall smartphone experience with the iPhone 4 represented as a separate measure of market expectations.  The iPhone 4 had a surge this past winter as Verizon was able to open it’s doors to iPhone refugees.  No changes in hardware, no major OS changes, simple a change in the network the phones had access to and voila, an 80% increase in the reported user experience over the AT&T baseline.  Carriers matter, period. 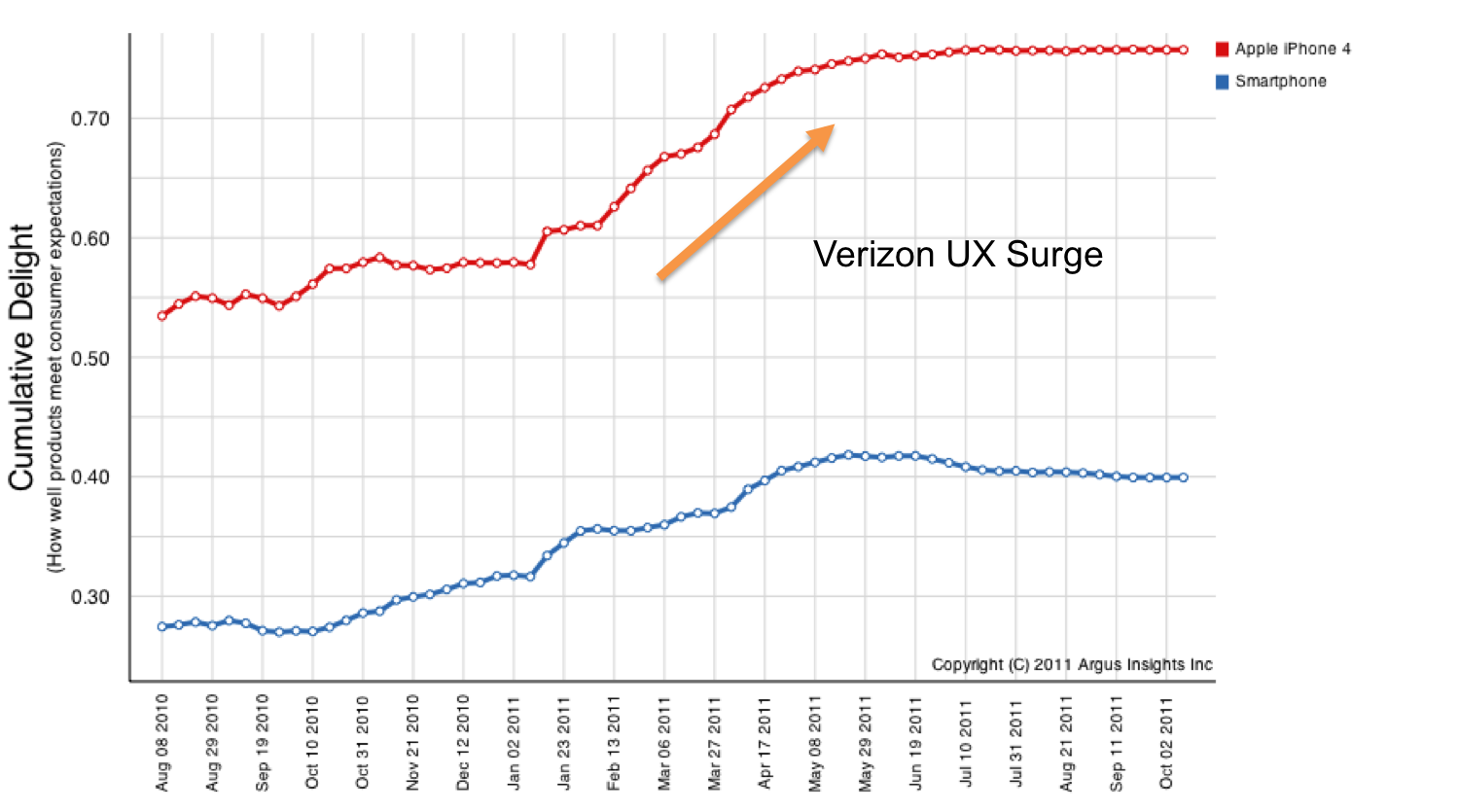 Our graph of the Verizon Surge shows the average Cumulative Delight (on a scale of -1 to 1) for the smartphone market as measured from each product release date.  Typically products decline in delight over time as new products are released and disrupt existing user experiences.  This didn’t happen with the iPhone 4.  This late in the game surge is due to the opening of Verizon’s network to iPhone 4 customers who were delighted to have a smartphone they could use to make phone calls.

But for the Sprint and Apple partnership will we see the same synergies manifest?  We think so for the following reasons.  iPhone 5 reflects the evolution in smartphone usage and tablet usage as well as the competitive

pressures from the likes of HTC, larger screen, faster processor, effectively becoming a mini-iPad that can make phone calls (because face it, it’s hard not to laugh when you hold your iPad up to your ear to answer that call from Mom).  Larger screens hint towards an even greater focus on content consumption, surfing, gaming, movies, etc. the same trends we are seeing across both Tablet and Smartphones.  See the graph below to see how the conversations about smartphone reflect usage levels.  The green bars on the right show the distribution of positive comments across all reviews and the red bars on the right show the negative comments across all reviews.  Notice that of the top ten most discussed usage scenarios, the remaining nine almost double that of using the phone as a phone. 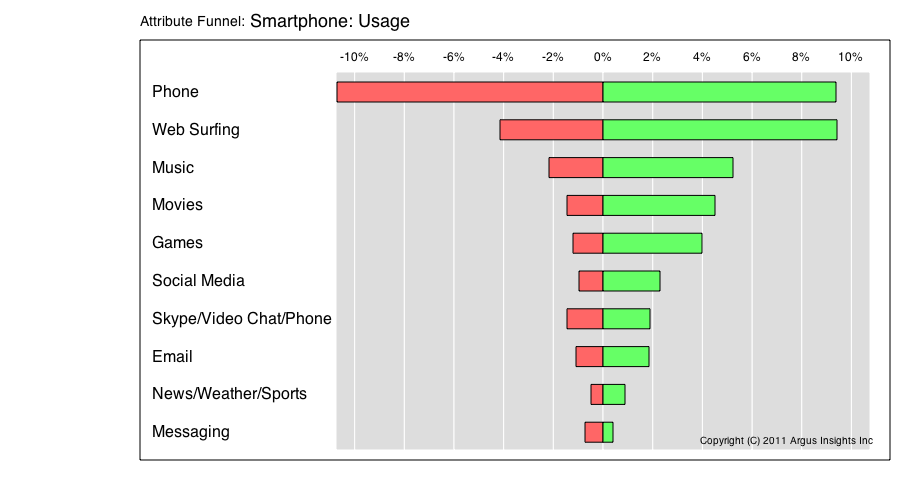 We spend more time on our phones not talking as we spend talking.  This deluge of content requires bandwidth and the US network with the most mature 4G (real 4G, not rebranded 3.5G) is Sprint.  This means that Sprint is the best positioned network to help Apple deliver on the promise of the fully turbocharged iPhone 5 experience, especially as they become more reliant on cloud based delivery systems.  Amazon’s recent announcement of the new Kindles, especially the Fire, coupled with the ambitious launch of the Amazon Silk browser puts additional pressure on Apple to get the extended parts of their growing content empire dialed in.  Sprint could be the right partner to deliver on this promise to the broadest swath of the market.  We look forward to watching this story play out over the coming weeks and months.  Contact us if you would like more details on the impact of the iPhone 5 on the mobile competitive landscape.