Rumors of the PlayBook's demise are grossly exaggerated!

Here at Argus Insights, we’ve been closely following the Tablet Market since the iPad2 launch.  And by “following” we mean digging through the market’s response to the growing portfolio of tablet options. How deep, you ask? Imagine the Hubble Telescope turned so that’s it’s focused on the Tablet Market instead of distant nebulas—that’s how deep.

Like digging through Hubble data, we’ll start with a map of the current Tablet universe. Below is our latest Buzz and Experience Landscape chart for the Tablet Market. 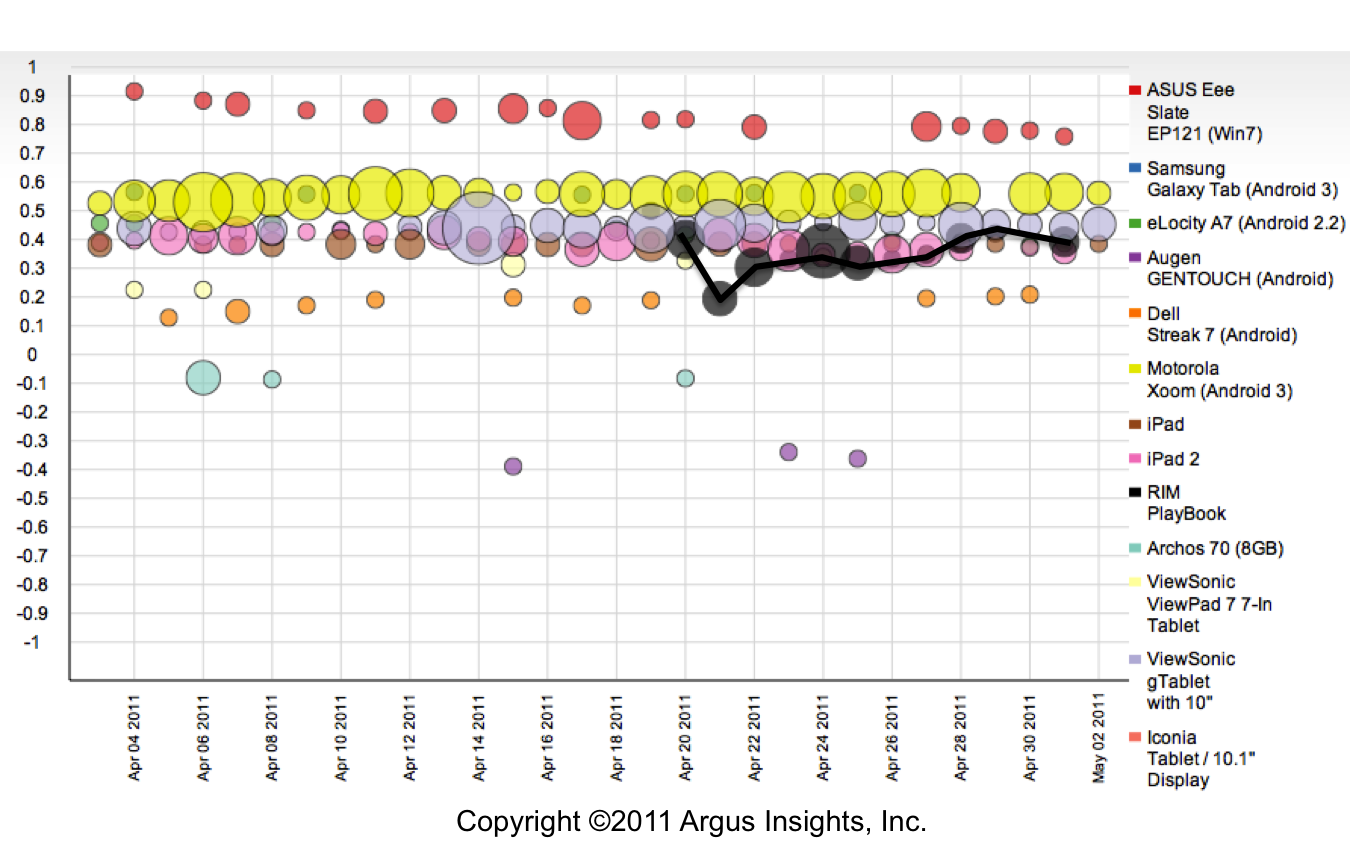 Notice the dark sparkline for PlayBook activity in the market.  After a rocky start, it’s recovering as users get their hands dirty with the device.  The PlayBook is still trailing the Xoom and the gTablet from a customer delight perspective, but it’s providing a stronger showing that pundits initially gave it credit for.

So what’s catching?  Could the architecture decision for PlayBook-to-Blackberry tethering mean that Jeff Hawkins idea behind the Palm Foleo has taken hold? Here at Argus we speculate that consumers desire to pay once for bandwidth across their mobile devices instead of separately for each gadget.  Let’s face it, it’s rare you have your tablet without your phone and, in that context, tethering makes sense.  We’ll add an analysis thread on tethering as this story continues to evolve.

Still there must be more to the reversal of fortune for the PlayBook than just tethering.  Let’s dig deeper to understand exactly what people are using the PlayBook for.  Below is the Attribute Funnel for how consumers are using the PlayBook.  The data is built using a semantic category model that processes actual user responses.  No surveys, no focus groups, just pure, unsolicited us

er feedback—real insights you can act on. 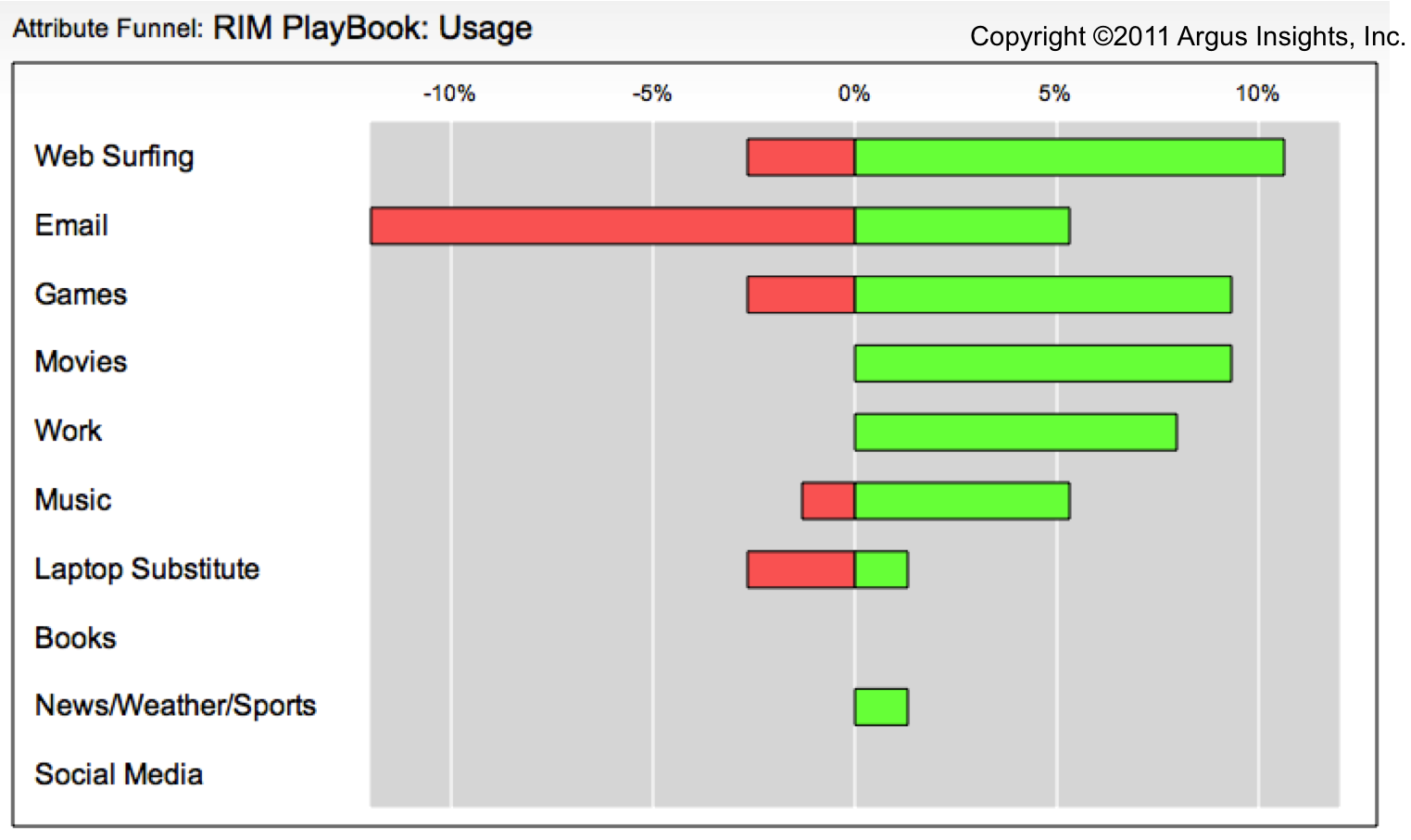 As with most tablets, Websurfing is the primary use for the PlayBook.  Where Playbook diverges from iPad and others is the heavy use for email—not a surprise given RIM’s enterprise roots.  What’s interesting here is how annoyed users are with email functionality.  RIM users are passionate emailers and are connoisseurs of email clients, so their expectation of PlayBook email would be high.  When we break this down by Sentiment Segments in the Segmented Attribute Funnel, new patterns of love and hate manifest themselves. 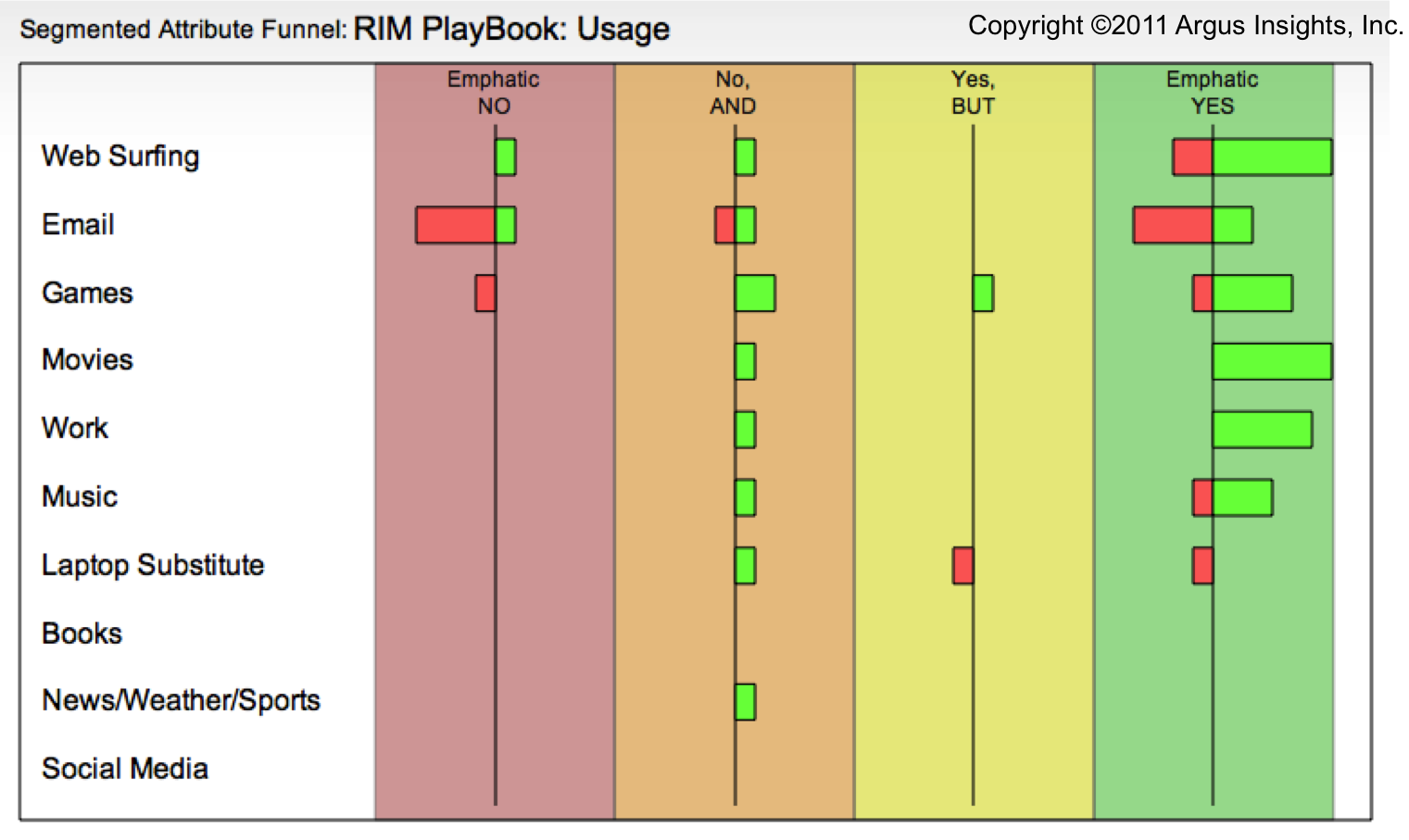 The Segmented Attribute Funnel splits out the analysis by segments of sentiment, broken down into four areas, Emphatic NO (Curmudgeons), Emphatic YES (Lovers), No AND (Keys to Satisfaction), and Yes BUT (Source of Delight).  As you can see, even the Lovers don’t love the email client.  Even those that don’t care for the PlayBook experience still find the web-surfing to be compelling.

With only two weeks of data and a small sample size, we can already see how the PlayBook experience is trending.  Overall, the device is working as expected in most areas (with the exception of the email client and functionality as a laptop substitute).  Looks like RIM, contrary to popular belief, has delivered a winner.  Like the radically different BlackBerry Storm, the PlayBook has a learning curve.  For the users willing to make the climb, the new tablet is delivering (mostly) on it’s promise.

Commission Bot – $30,000 In Cash Prizes Dec-jan 2012
zp8497586rq
Mapping directions to your Angry Peeps contacted on BBM iPad has its nose in the Enterprise Tent. Asus is already having tea inside.

ADT’s Pulse App has never been one of the most loved Smart Home management apps on the market. While ADT has struggled to make the app customers use to control their monitoring service better with new releases over the past few years, they have failed at every turn.  Their most recent attempt was on 15 […]

Apple announced the HomePod today!  Yeah!  Finally Apple has a simple multiuser interface to Siri so that all of those Homekit users can engage with their Smart Home investment without whipping out the app.  Except it might be too late… Clearly meant to compete with the Amazon Echo, the HomePod is a bit late on […]

I know it’s only June 5th but we already have insights for what happened with Smart Home providers last month.  Yes, we have data that fast!  And what we are seeing does not bode well for the “do it for me” market overall.  Vivint remains on top with an impressive gain in engaged consumers over […]