Have Wearables Worn Out their Welcome?

Wearable technology is rapidly evolving. Everything from fitness bands to virtual reality glasses are hitting the market, so naturally Apple jumped into the mix with the announcement of its new AppleWatch on Tuesday, the 9th. It seems like every major smartphone manufacturer is creating a smartwatch, but as the options increase, consumer interest remains static. 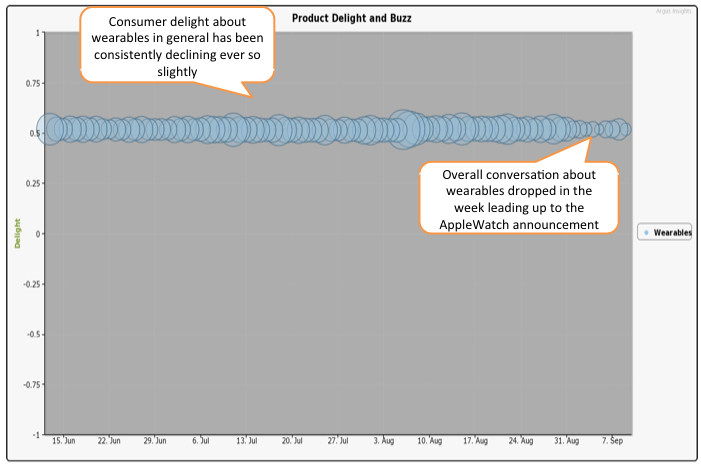 As demonstrated in the chart above, consumers are consistently delighted by wearables in general. There are slight variations in the amount of buzz generated about this subset of products, but the buzz dissipated in the week leading up to Apple’s AppleWatch announcement. Is this market dying, or could Apple’s smartwatch launch revive consumer passion? 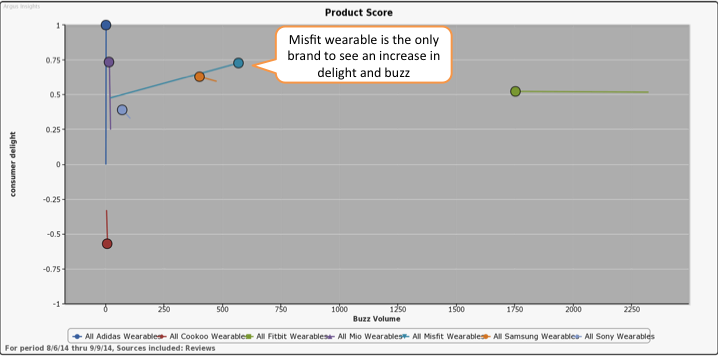 Above is a chart that displays the current landscape of the wearable market. With the AppleWatch not yet in stores, Fitbit products are generating the most discussion among consumers. However, the conversation around Fitbit wearables has dropped from a volume of 2319 to 1753 within this past week. The only brand to see a significant increase in delight and buzz volume was Misfit, advancing from a buzz volume of 20 to its current volume of 568. With generally positive consumer feedback, wearables have a promising hold on consumer’s hearts. A multitude of smartwatches, many of which are being revealed during IFA by major players, are poised to test this relationship.

Taking to twitter to gain another perspective on the matter, it is clear that the AppleWatch announcement revived conversation about wearables. People have been talking about various brands on Twitter, some of the most popular being Fitbit, Samsung, and Sony. The volume of conversation was low before the teasers and product introductions in accordance with IFA. After a lull beginning on September 6th, mentions of wearables skyrocketed on the 9th. References to Apple were second only to Fitbit after the unveiling of the AppleWatch.