Is Apple starting to rot or just age gracefully?

Growing up, my grandparents had a match pair of apple head dolls next to their fireplace.  I always thought the wizened heads were amazing. When I tried to replicate the process of carving and then drying the apple the result was an ant infested rotten apple.  Which path is Apple headed down and can they recover?

Our tracking of Social Capital shows that the consumer market is falling out of love with Apple.  Companies rely on the release of new products to boost their Social Capital with consumers as all customers eventually fall out of love with their experiences (Harleys and a good single malt excluded).  What’s troublesome as you can see in the graph below, is that Apple’s new products have not succeeded in providing that critical boost, especially prior to the crucial holiday season. 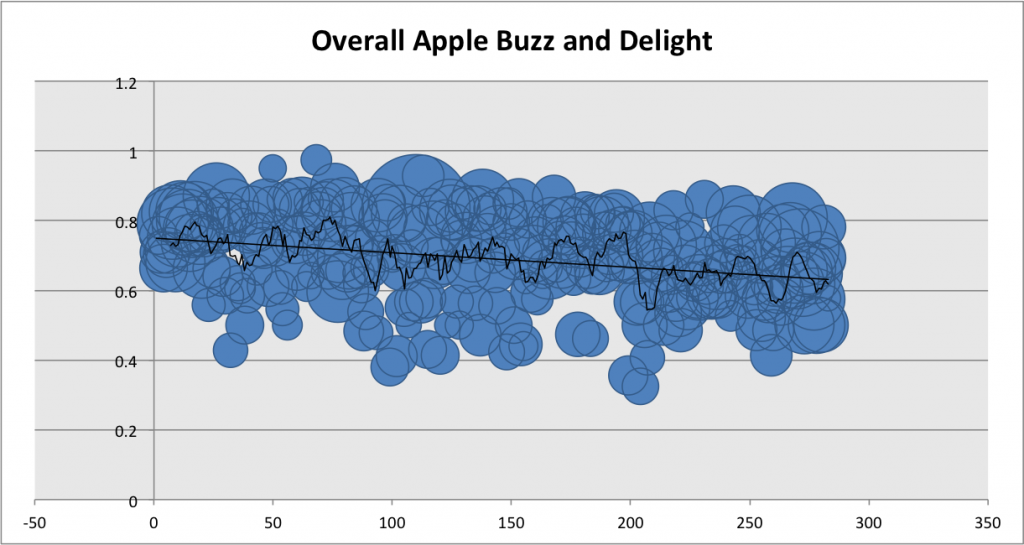 But didn’t Apple just launch the iPhone 5?  Shouldn’t that be driving the market mad with desire?  Actually, the biggest impact of the iPhone 5 launch was to drive buzz around the iPhone 4S as you can see from the two graphs below. 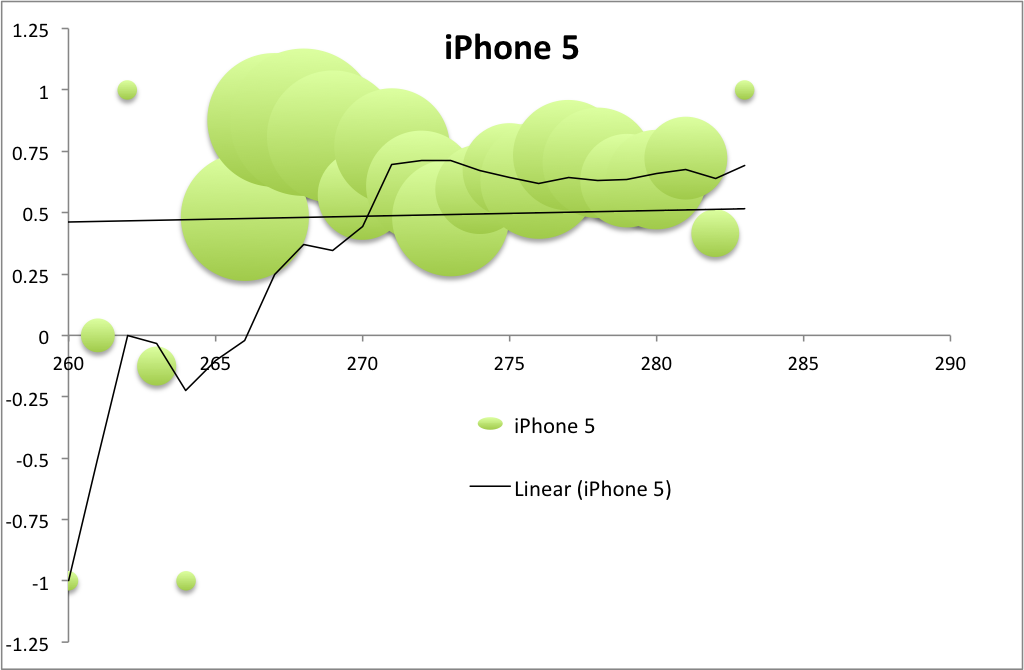 Not only did the iPhone have a poor start (worst in years for an iPhone) but it dropped after the initial response.  It has recovered but isn’t delighting consumers at the level expected. 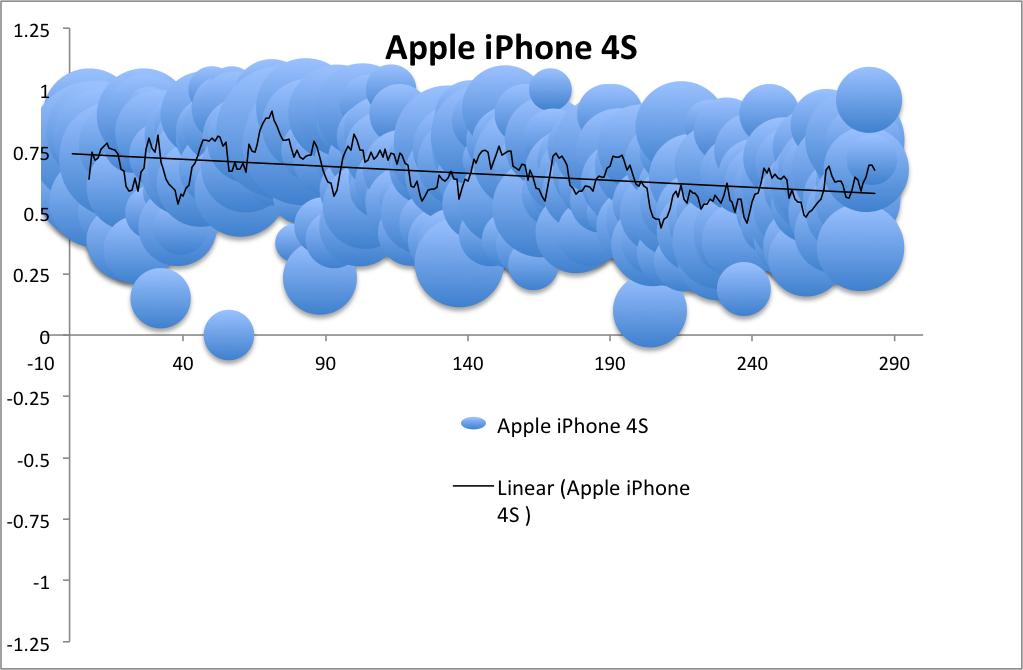 Buzz levels for the iPhone 4S are actually on par with the iPhone 5.  Historically the buzz (and corresponding demand levels) for older iPhones have dropped in the face of new launches.  The iPhone 4S hasn’t.  Neither did the iPad 2 after the new iPad was released earlier this year.  In fact, buzz for the iPad 2 increased and outpaced the new iPad. 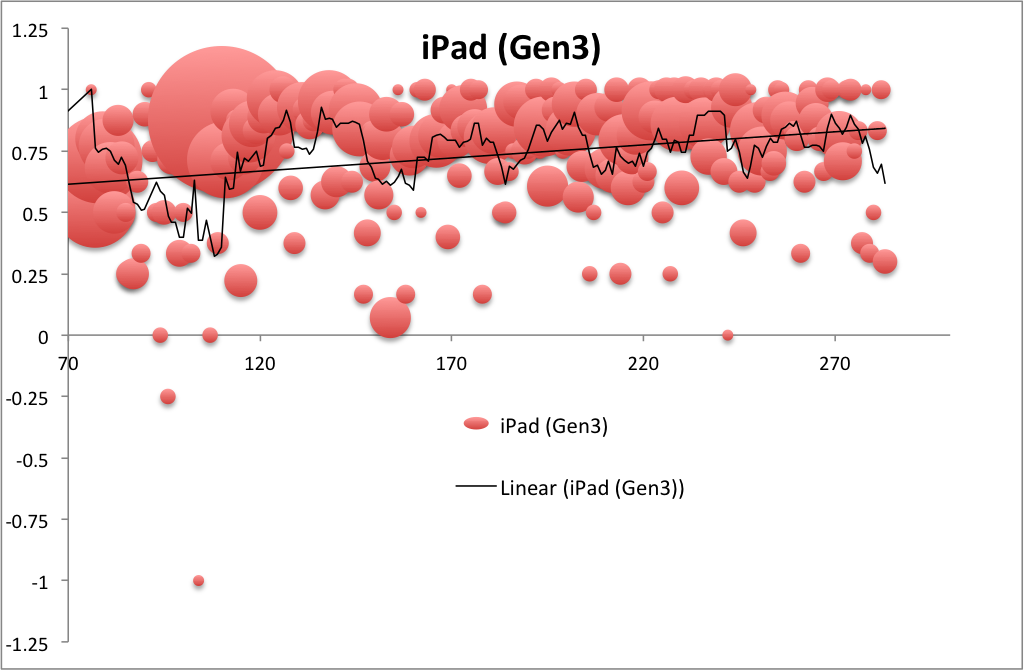 Only now is the iPad 3 reaching it’s full potential, after the iPad 2 inventory has been depleted.  For both the iPhone 5 and the new iPad, when a lower priced Apple alternative existed on the market, consumers continued to flock to the older product, showing the price sensitivity of the broad market as compared to the typical price insensitivity of Apple’s core fans.  In the case of the iPad 3 and now the iPhone 5, reviews went down after launch, something that hasn’t happened to an Apple product in YEARS!

This is the same pattern of decline we saw with RIM and Motorola in smartphones.  Will an iPad mini refresh Apple’s Social Capital?  Doubtful based on the current landscape but its still too soon to tell whether Apple will age gracefully, shrinking slowly like an apple doll, or rot quickly and be consumed by an angry market of ants.
Do you have to own the whole experience to deliver it well? Goliath vs. Goliath, Apple and Microsoft tag team on tablets and software this week