Again, we called it. Sales of the new iPad fail to meet expectations.

According to Josh Lowensohn over at CNET, “Apple has sold fewer units of the device than analysts had estimated it would.” via Strong iPhone sales overshadow new iPad in Apple earnings | Apple – CNET News.  You can see from our prior posts that Argus Insights was concerned about the launch performance of the new iPad.  Not only were the delight levels falling drastically ( at

least until Best Buy sent out their “please review your recent purchase emails” to what appears to be a cohort of passionate iPad owners all posting glowing reviews on 18 April) but the buzz levels for the new iPad were low, especially compared to the still available, but now cheaper, iPad 2.  Delight and Buzz both began to recover in April but not soon enough to shift our thinking regarding the earnings call this past Tuesday.

Consumer responses to product experiences, as measured using our CIA platform, continue to be leading indicators of sales trends.  We also anticipated the surprising increase in iPad 2 sales at the end of Summer 2011.  I’m sure all those iPad 3 case and accessory manufacturers would have appreciated some advanced warning before ramping additional inventory…

If you want our help getting the jump on uncertainty in your market, please contact Argus Insights today, sales@argusinsights.com or +1-877-992-7487.

iPad 3 recovers the love of consumers, just in time for the earnings call on Tuesday

You know we’ve been sharing that the new iPad has proved to be a more compelling reason for consumers to buy an iPad 2 than the new iPad. Then the improbable happened. The iPad 3 recovered. It did more than recover, it jumped to the top of the charts. It’s like the whole family answered the call to review Aunt Bertha’s steamy romance model on Amazon when sales were flagging. Check out the graph below to see what we’re talking about.

What happened?  Was this the result of post Tax Day ex

uberance?  “Now that I’m getting a tax refund, I’m buying a new iPad!”  The new iPad jumped ahead of the iPad 2 after a rapid decline in delight, something unheard of for an Apple product.  In fact, the new iPad is considered to be the most delightful tablet on the market today, barring any new releases in the coming weeks as you can see in the sparklines below.

If you want to know why this drastic shift took place, give us a shout at Argus Insights.  We’ll be releasing a report on all the sordid details of the new iPad’s market response in the coming weeks that will include our own forecast as to the future success of the new iPad.

When we compare customer reported perceptions of the new iPad just weeks after launch with that of the iPad 2 since it’s launch in early 2011, we see that there are gains on a few key areas for Apple and those trying to compete with the iPad.  The new Retina display is clearly a delighter for most new iPad owners.  Is anyone tired of calling it the new iPad?  What do kids as for Christmas later this year?  The new iPad that is no longer new?  It’s an analyst nightmare…  Anyway, the display is clearly a delighter. 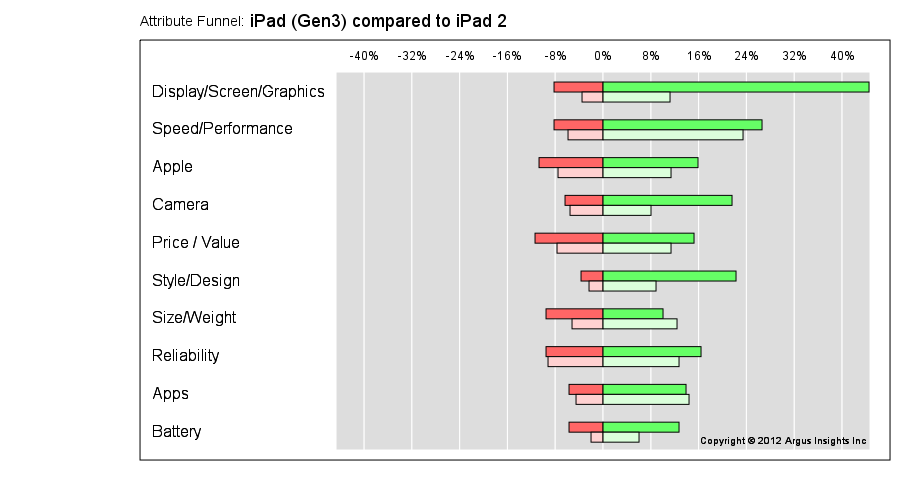 Oddly enough, the new processor is not delivering greater perceptions of performance over the iPad 2, meaning all those extra pixels are costly in more ways than one.  We are seeing increased complaints about the size/weight, something that plagues iPad customers over other tablets.  We are also seeing more negative commentary around price in the face of more serious competition from A

mazon and Barnes and Noble.

The new Camera, equivalent module to what’s on the iPhone 4S, is also a delighter for those hordes of parents using iPads to capture Suzy’s state championship winning homerun or Bobby’s 2 hour monologue in the first grade production of King Lear.

When we look at the daily returns we see overall delight smoothing out meaning that the more recent customers are a bit happier but it will be a while before the new iPad reaches the levels of delight achieved by the iPad 2.  The drop in iPad 2 pricing is definitely cannibalizing adoption of the new iPad (3), though we are seeing a shift from iPad 2 buzz to the new iPad.

Watch in the coming days for Argus Insights launch of our first Tablet forecast for the iPad 2.  It will be available for purchase at $489 at the new Argus Insights report store launching at the same time.