Is the new iPad like Disney's John Carter or Star Wars Episode I?

Apple sold a ton of new iPads in preorder and Apple fans rushed to the box office, er, Apple Store and other retails to be the first in their neighborhoods to see, er, hold the new iPad.  We saw this exuberance writ large in our CIA data as viewed below.

Notice that consumers are discussing less and with less excitement of the new iPad launch.  The iPad 2 also had a slow start with consumers but eventually built up steam with a late summer surge we discussed here. But what’s more telling to see the how the discussion of the iPad 2 hiccup when the iPa

d 2 was announced and then returned to pre-new iPad levels, indicating that many consumers are opting for the now more competitively priced iPad 2 over the new iPad.

Will the new iPad be a hit only on the opening weekend or evolve to a sleeper hit as the benefits of upgrading to the new Retina Display drive consumers to abandon their current tablets?  What does this mean for other tablet manufacturers?  Find out when Argus Insights releases their report and forecast for the new iPad in the coming weeks based on what we are seeing in terms of consumer adoption.  For more information you can email us at ipad_report@argusinsights.com.  The report will be priced less than a fully loaded new iPad and contain a rich set of insights and our first ever forecast.

Hotness of the new iPad isn't impacting it's Hotness

Consumers and experts have been fired up about the new iPad for different reasons.  Experts have published extensive testing and videos of aiming IR temperature guns at the new iPads in the midst of gaming, video capture or testing Angry Birds Space, clocking surface temperatures over 115 degrees Fahrenheit!  Consumers, not as concerned with the iPad’s contribution to global warming, are snapping the new iPad up like hotcakes.

When we compare the launch profile of the new iPad (Gen3) to the prior two launches, we see that the current generation is getting a warmer reception (pardon the pun) than its forefathers.  The buzz is less, partly because of the lack of availability at Amazon.  Overall we see an accelerating delight score, compared to the iPad 2. 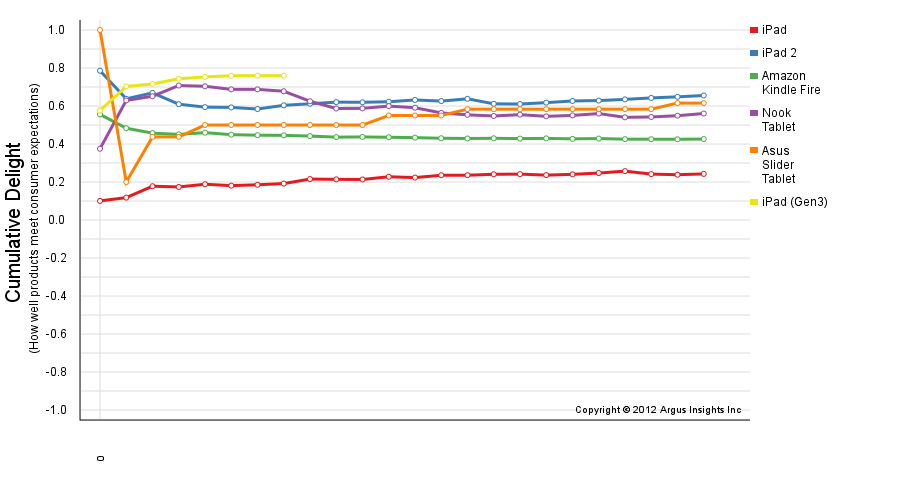 When we compare the launch to competitive products, we see that the new iPad is experiencing a strong launch than any of these competitive products.  One caveat, both the original iPad and the Asus Slider were late bloomers, igniting customer delight some weeks after launch after consumers realized what a delight they were to use.  For the original iPad, this was due to the newness of this part of the Apple portfolio.  For the Asus Slider it is mainly due to under marketing what is a compelling Android tablet.

Stay tuned as we begin to unpack what is driving the fiery launch of the new iPad in the minds of consumers.  We will be releasing a report for purchase in the coming weeks that will detail the good, the bad, and the hotly debated of the new iPad, separating the expert chatter from the consumer reality so that competitors and partners alike will know what aspects of the new iPad experience are igniting the passions of consumers for the 3rd generation.

What is the impact of the new iPad launch on the other tablets?

We’ve been saying that our metrics of Experience Equity are leading indicators of future sales volume for quite some time. Now we are growing bolder in our approach. Starting today, we are going to begin offering routine predictions of the weekly shift in sales trends. We’ll start with the Tablet market, notable due to the recent launch of the new iPad. Below you will see a table with our predictions for tablet sales, by model over the next week. You might say this is cheating, expecting that all non “iPad 3” tablet sales will fall this next week as the world holds its breath to see whether the new iPad is all that.

As you can see from the buzz landscape below, we did see the market take a breath when the Apple event was announced.  The only tablet that seemed immune from the iPad 3 buzz was the Nook Tablet.  Based on the initial shift in buzz levels, it would seem the Kindle Fire might take a larger hit in sales volume when the new iPad finally makes it way into the hands of some consumers this Friday.

Recent Buzz Landscape for major tablets highlighting the impact of the iPad launch announcement on 7 March 2012.

Based on this data, we have started pulling together weekly forecasts based on how we see consumer adoption shifting the mindshare and eventually marketshare of these products.  The details are secret of course but overtime we’ll be checking our math against available historical sales data.  Please let us know if this matches your expectations for what’s happening in the market place.  Imagine receiving a refined forecast that reacts to shifts in customer adoption rather than relying on vendor supplied guesses! 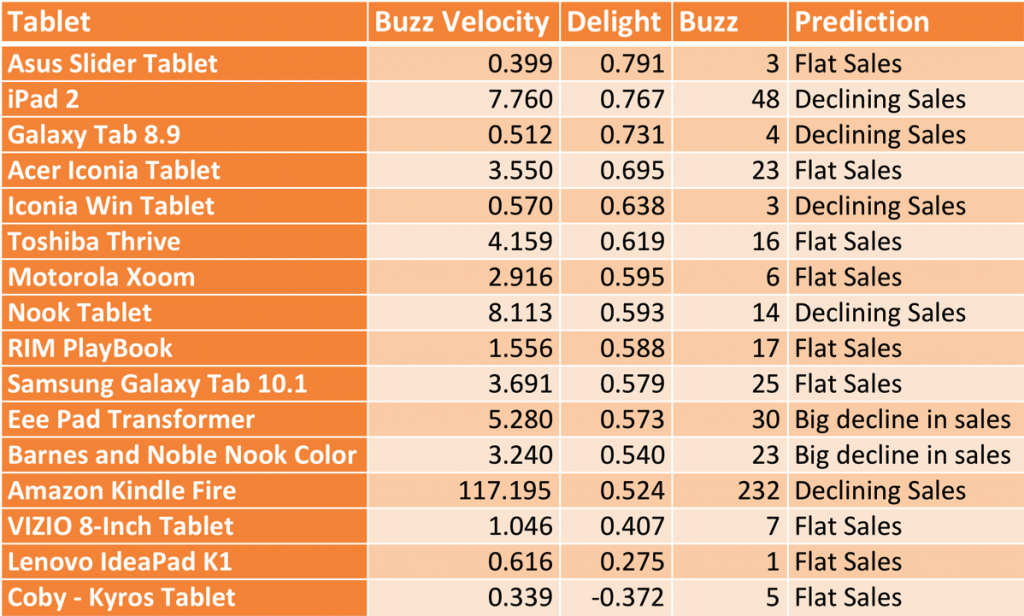 Within weeks of the availability of new iPad, Argus Insights will publish an analysis of the launch, comparing the anticipation with reality, and highlighting what aspects of the new iPad pose the greatest competitive threat to other tablets.  Let us know if you’d like to receive information about this upcoming report.  I’ll be posting the outline in a later post.

Many have counted Nokia out of the smartphone fight, citing the multiple OS personality disorder as a symptom of strategic thrashing that comes with the slow death of a company. When the Microsoft partnership was announced analogies were made of two drowning victims trying to save each other. Well, it turns out these two ‘victims” have crafted themselves quite the lifeboat with the Lumia 710. Compared to it’s smartphone competition touting dual and quad core chipsets, and other “speedboat” level specs, the Lumia would make most techies turn their nose up at this pluckly little handset. As it turns out, the bulk of the US market is not techies and based on what we’ve been seeing from the user response to the Lumia, Nokia and Microsoft are not only no longer in fear of drowning but are making great progress to shore!

As you can see from the Buzz and Delight Landscape the early Lumia customers are delighted with their new Nokia/Microsoft hybrid handset.  Similar to the Kindle Fire approach at targeting the pent up demand for lower priced tablets, the Lumia targets T-Mobile customers that have been on the smartphone fence, looking at the battle between Android and iPhone and waiting for the prices to fall enough so they can play too.  And they are delighted with how far their dollars are going.  When we examine what are the topics most discussed by Lumia users, it differs substantially from other smartphones.

A couple items to point out.  First, is the wall of green, indicating overwhelmingly positive views by these early customers.  Even the iPhone 4S has a broader spread of sentiment than the Nokia Lumia, meaning that a higher percentage of iPhone 4S users are more negative about more topics that Lumia customers.  Lumia customers are even being delighted differently than most customers when we take a look at the most discussed usage scenarios.

Most smartphone customers discuss using their smartphones as, well, a phone.  Lumia customers are initially fascinated with the novelty of web surfing, music and games over voice services.  We believe this is because these are consumers new to smartphones and are delighted by the extra features beyond what their tired feature phone provided.  Now they can afford to play with the big kids with their touchscreens and data plans.

Bravo Nokia, Bravo Microsoft.  We believe this strategy will continue to bear fruit for you both.